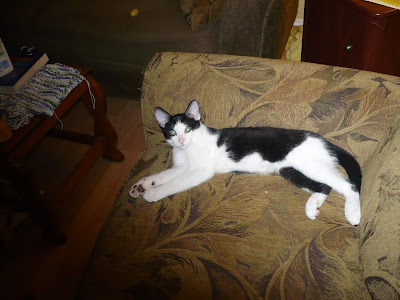 Saku was the sixth kitty to join the clowder.

He was born in a little town hours away from here, outdoors, in the middle of March 2010.  Our bean sisfur was his first mom bean, but she couldn't keep him, so he came to live with the rest of us about 6 weeks later.  (That's we don't have any really little kitten pictures of him) 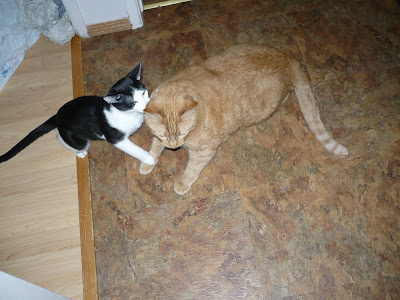 He immediately was named the "pest" by the rest of the kitties.  AND he made the mom bean say ...no more!

Silas and Saku loved to play together,  and while Silas was gentle with his little brofur, the same can't be said about Saku. 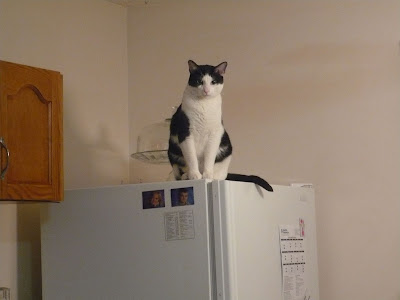 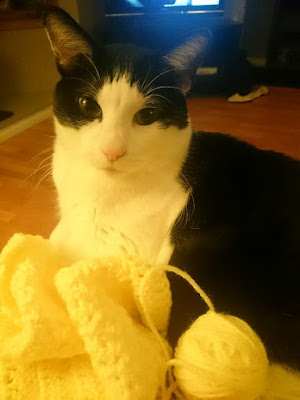 Saku has always been an explorer, always curious, and surprisingly sensitive.  At first he wasn't a big fan of the mom bean, but as he's gotten older, he likes to spend lots of time in her lap.  He enjoys napping in the sun-puddles on her our bed or in the evening in a cat bed in the basement near the bean brofur.

Of course, he's a big helper too!  Though mom bean doesn't always think so. Especially when he runs off with a ball of her yarn.  MOL

Have a great day efurrybody! 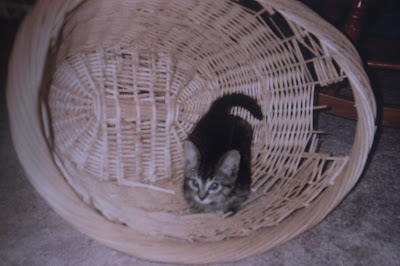 Among the old photos, mom bean found this one of Sasha when he was a furry little kitten.

Sasha came to live with mom bean and our bean sibs in July, 2000.  They had moved into our old house and decided it was time to bring a pet into the house.  Little did they know that nearly 19 years later, he'd still be here.  (I'm very happy that he is! - Mom) 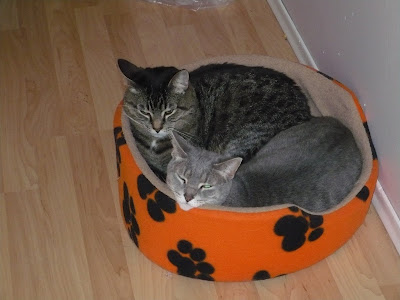 As most of you know, Sasha is the elder statesman of the family. He has put up helped with all of the kittens who came later.  He was best friends with Silver.  Sami adored him, and he was pawtient with Shady, Silas, and Saku too.  He wasn't a big fan of Sheldon, but tolerated the kid while he was here. 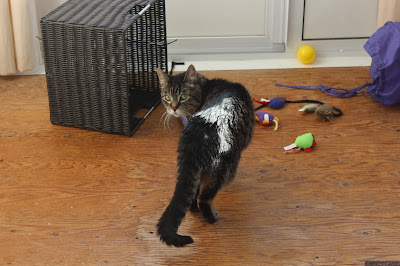 These days he spends most of his time sleeping.  When not napping he is reminding the mom bean that it is dinner time, or letting her know he wants out in the sun room.  This photo was taken yesterday when the sun warmed up the room just enough for a quick visit.  Even mom bean came out and sat on the steps for a bit.

Oh, and last night Sasha scared the daylights out of the mom bean.  She was just about asleep when she felt something on her face and just about jumped out of her skin because she thought it was a spider.  Then she realized it was Sasha's whiskers!  He was giving her butterfly kisses to let her know he wanted her spot on the bed.  Of course she moved over!

Have a great day efurrybody!

TBT - all the S' kitties

Hi efurrybody!  The mom bean has been going through stuff in the house and she found a whole bunch of pictures of us kitties.  So what did she do, she took pictures of some of these pictures!  She's such a silly bean because then she cleaned up an old computer and found digital copies.  MOL! 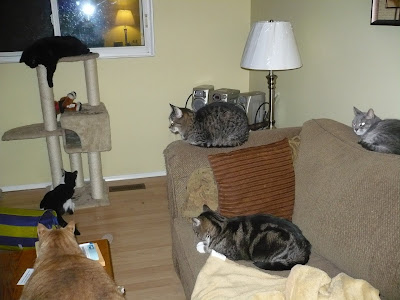 She was surprised to find this one, with the  six S's in one photo! From left to right, top to bottom, there is Shady on top of the cat tree, Sasha on the arm of the couch, Silver on the back of the couch, Saku on the floor below the cat tree, Silas on the coffee table, and Sami on the couch.  It was very rare to have efurryone together. 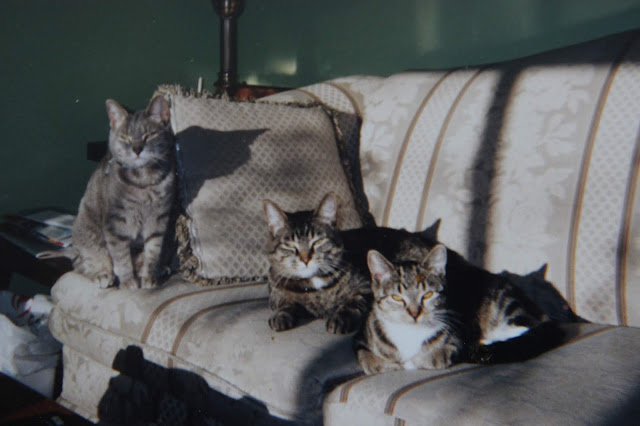 These are the original S' kitties, Silver, Sasha and Sami.  Sasha is our oldest kitty, and came to live with us in 2000.  Silver came next: she loved Sasha, then Sami came, and she loved Sasha, so that meant Silver and Sami didn't like each other at all. 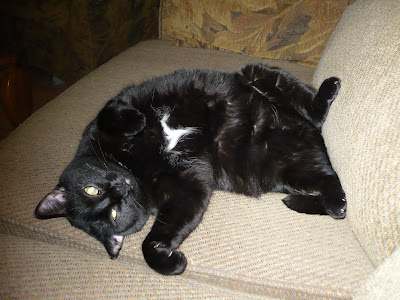 This is our sisfur Shady.  Mom bean is sad because she doesn't have any really good photos of Shady.  She was the quietest of the S' kitties.  She only called out when she was carrying a toy.  (Reminds us of our furriend Katie Isabella!) 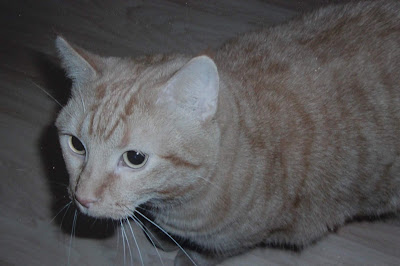 Here's our brofur Silas.  He was the biggest kitty and the biggest mom suck of us all.  (Though Saku is getting close - mom).

He is Shady's twin and Sami thought she was their mom (she wasn't really but she sure took good care of the kittens). 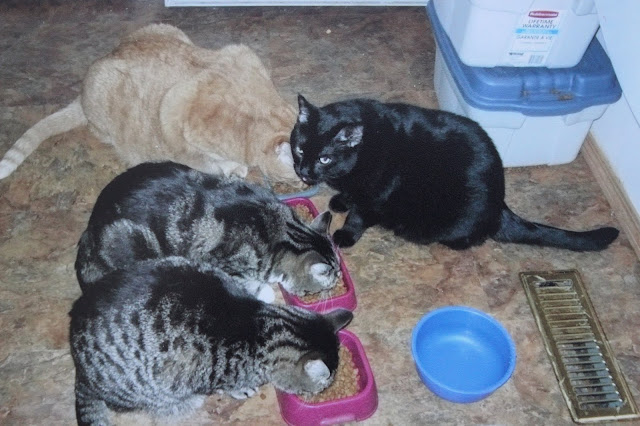 Mom bean thinks this photo was taken after Silver passed in April 2008; she calls it "Feeding time at the Zoo".  That's mean to saybut we were all well fed.  One time after mom bean had been on a trip (and we had a cat sitter), the Humane Society worker came by to check in.  She took one look at Silas (22 lbs. at the time) and said, "well, they are certainly not starving".) 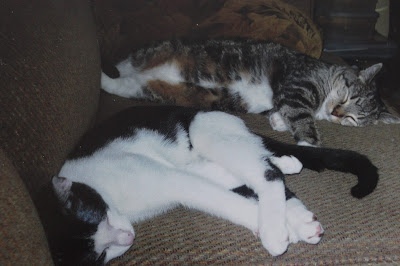 Finally, here is Saku when he was a little kitty with Sami.  She didn't act like his mom very much.  Shady and Silas played with him the most, but at first Silas was afraid of him!  Later they had lots of fun tussling and playing in the tunnel.


Silver, Sami, Shady, and Silas are now our angel kitties.  Mom bean misses them all the time, and sends them her love today.   We'll be sure to make time for some cuddles and lap time to let her know we love her right back.

Pee Ess:  Sheldon lived with us for awhile too, but he now lives with his own mom bean, bean brofur, and fursib Stanley.  Mom bean says that's a good thing! 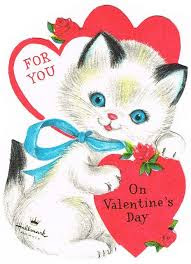 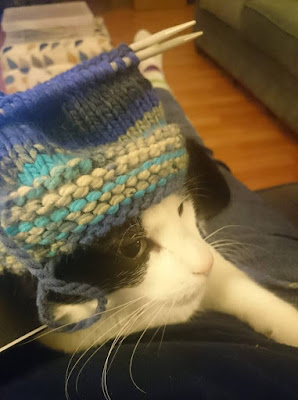 I was helping the mom bean with her knitting last night and she decided I could model the hat.  Looks purrfect, NOT!  Silly mom bean.

So, the mom bean hasn't been chasing green papers for awhile now.  Sasha and I talked about it, and we were a little worried but she brought home another bag of kibble, and more cans of stinky goodness.  There's enough to last for elebenty sixty two naps so we're okay.

The best part is she's here at the house with us, and her nap is usually planted on her our chair.  Except she keeps bringing out the knitting!

Oh, and something else that is confusing is our sunny room.  The other day it was furry sunny out there.  Sasha and I both asked politely (not so much - mom) to go out there so mom bean opened the door for us.  When we didn't immediately come in, mom bean closed the door on us!  Pretty soon we were asking, not so politely, to be let back inside.  It was sunny but furry cold!

Do you s'pose the sun forgot to turn on the heat that day?  We sure hope it turns back on soon!

Have a good day efurrybody, stay warm and dry! 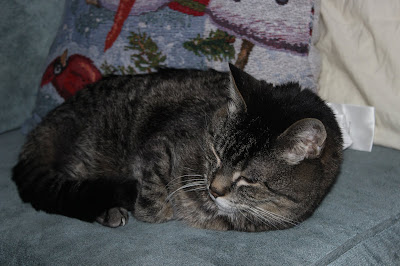 It's a good day to take a long nap on the couch.  The mom bean is watching the hurry hard girls and it's cold outside and not the least bit sunny.

Saku is having his nap on the mom bean's our bed.  All is good in our world.

Have a great easy Sunday efurrybody!
Posted by Saku at 10:40 AM 10 comments: 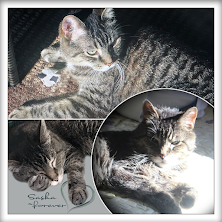